It’s pretty well acknowledged that we tend to select sketching sites contingent upon two factors: accessibility of coffee, and accessibility of bathrooms. Today we added a third – heat overhead on a patio! 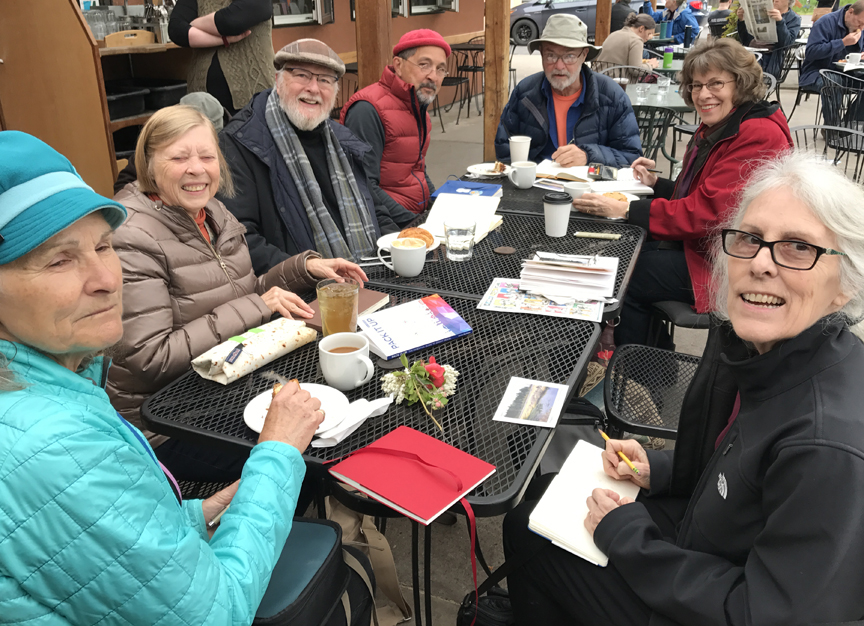 Sandy, Barb Sh., Ken, Hugh, Erik, Bev, Barb So. (& Jane behind the camera). As you may be able to tell by outerwear, it was nippy. 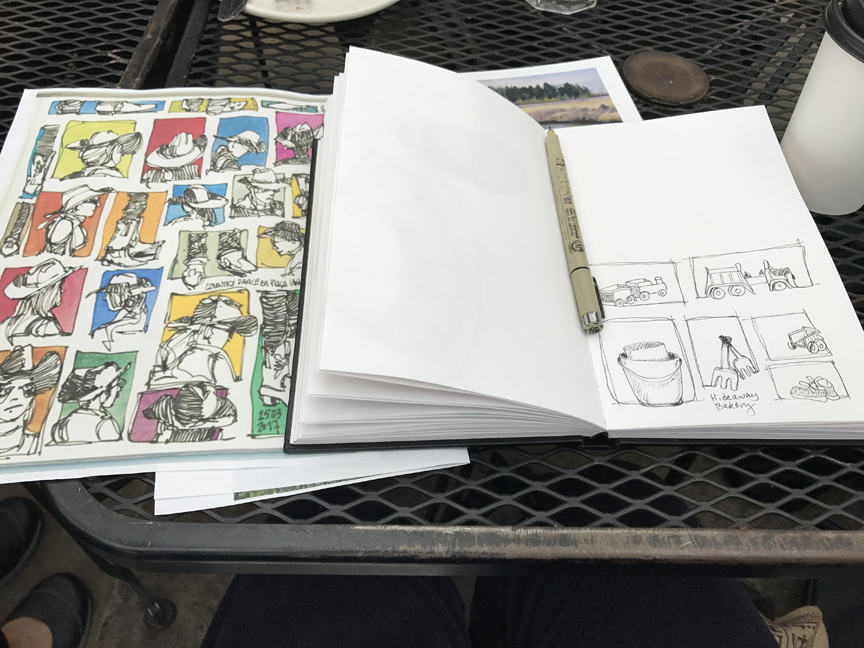 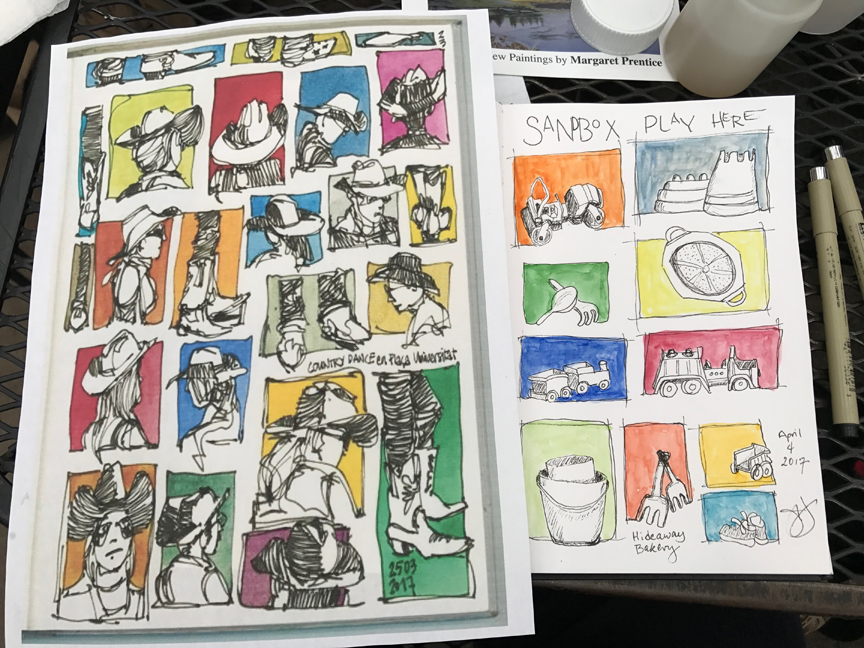 Jane came prepared with a print-out of a page by Urban Sketcher Miguel Herranz from Barcelona, & utilized a similar layout to sketch the items in the nearby sandbox on the patio. 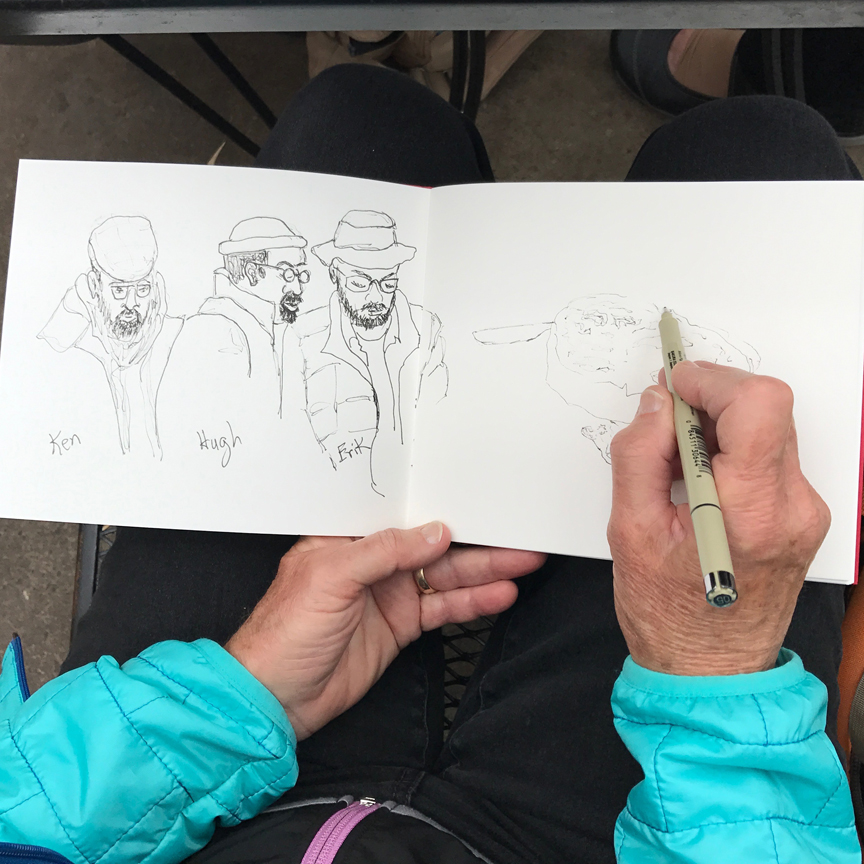 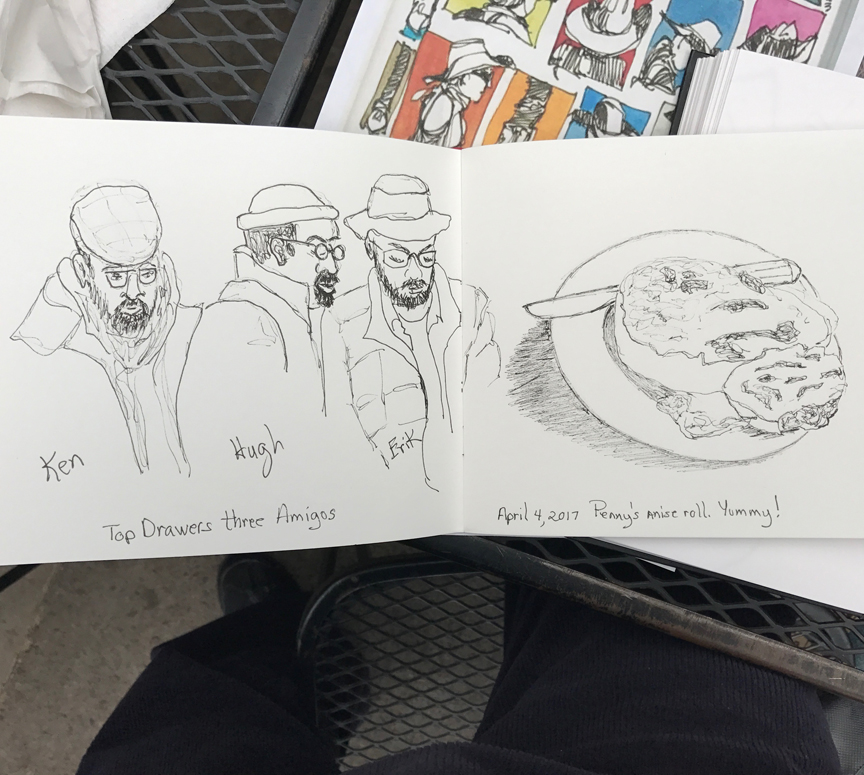 Sandy zeroed in on the lineup of  three TD guy friends – Ken, Hugh, & Erik – and then couldn’t resist Penny’s fig bagel.  Another attraction! 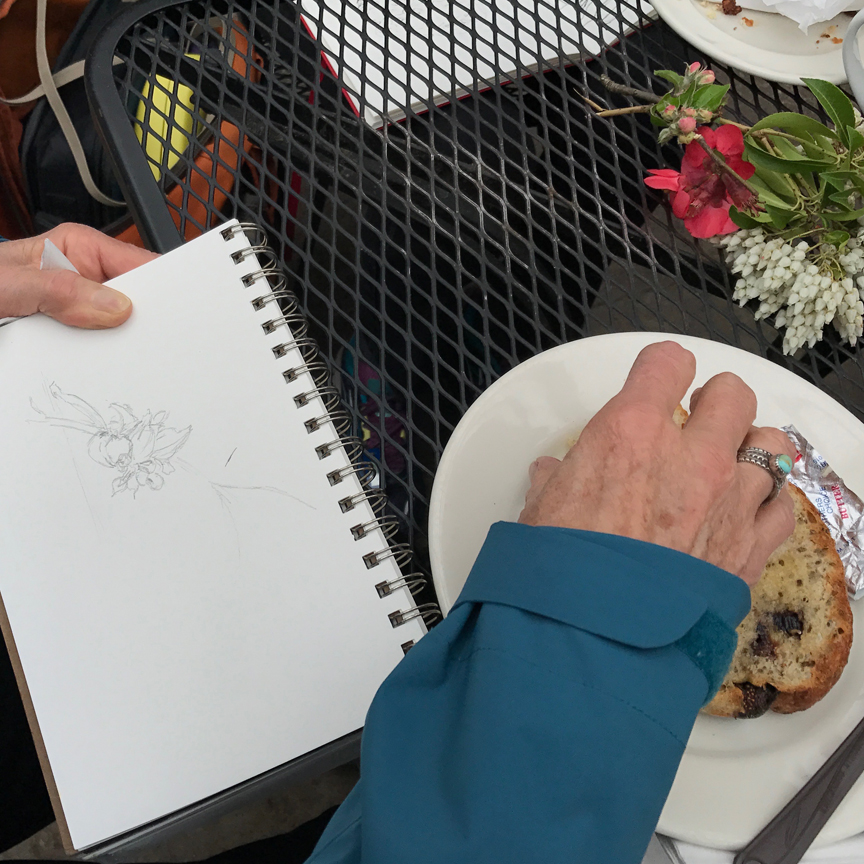 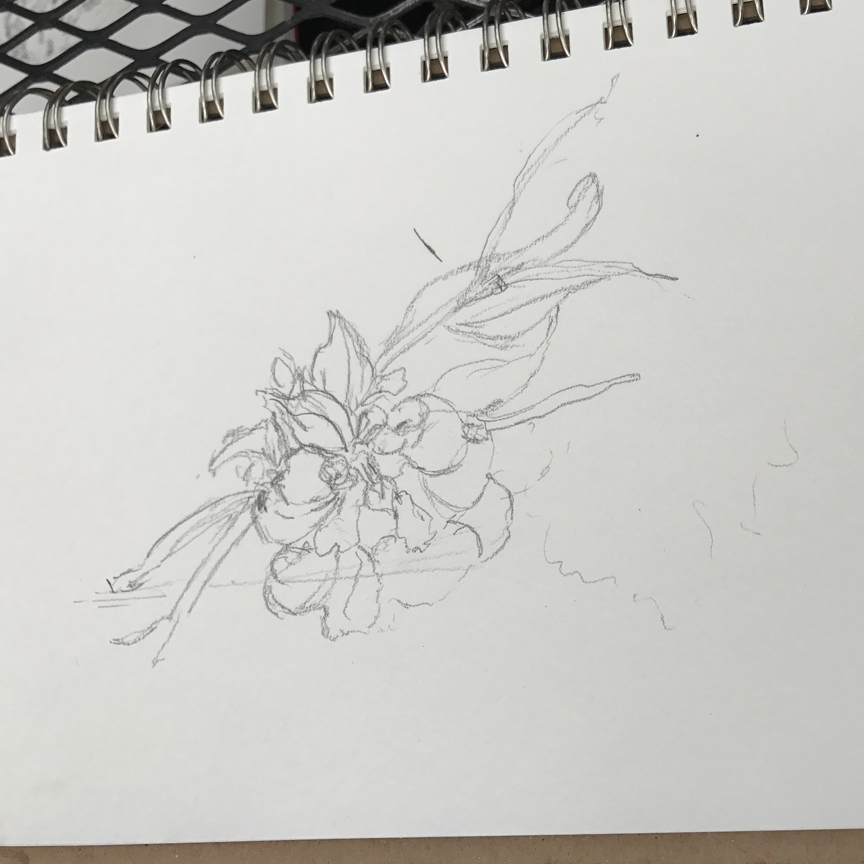 In between snacking on her treat, Penny sketched the quince flowers Sandy had collected on her walk. Lovely design ensued. 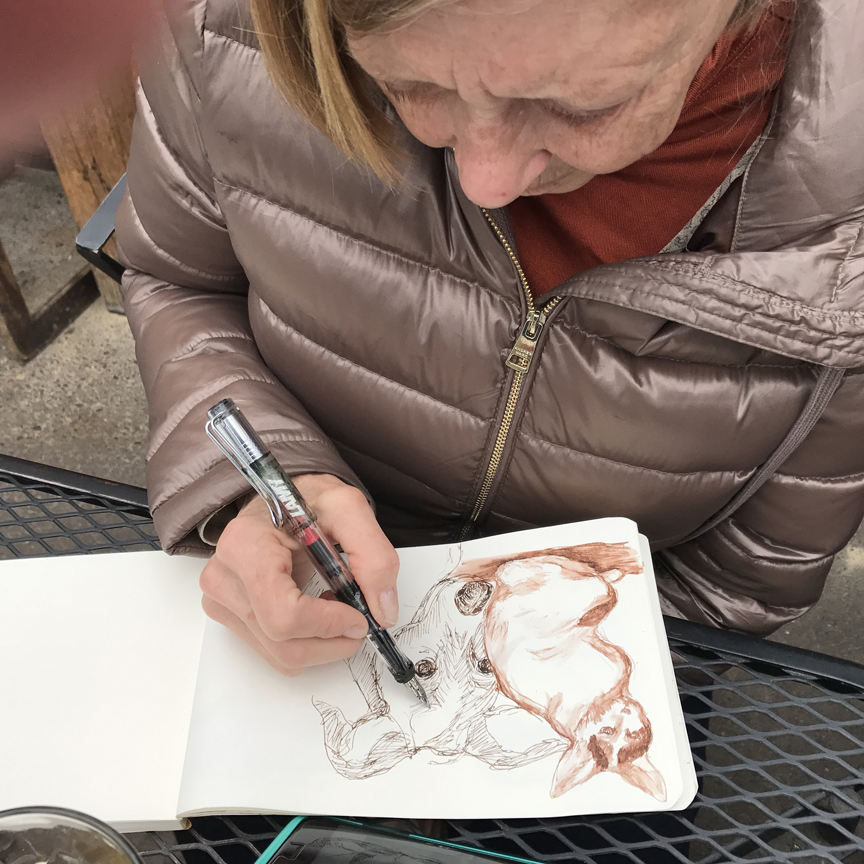 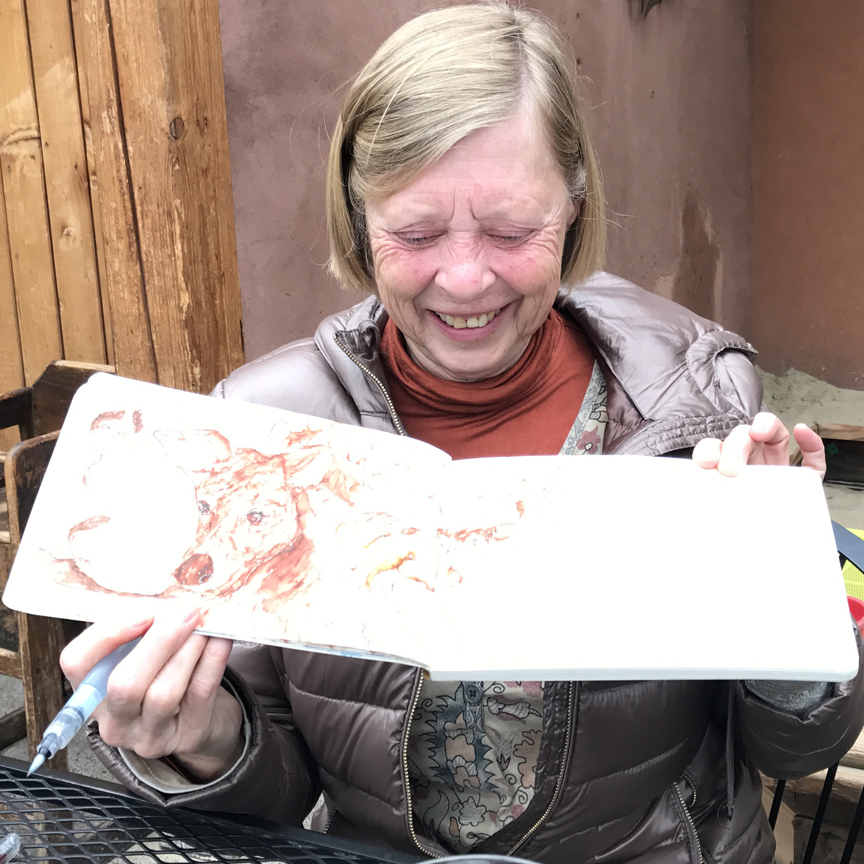 Barb had her water soluble ink pen going, adding her dog to the cat sketch, and then the St. Francis Basilica door demon. Whatta combo! 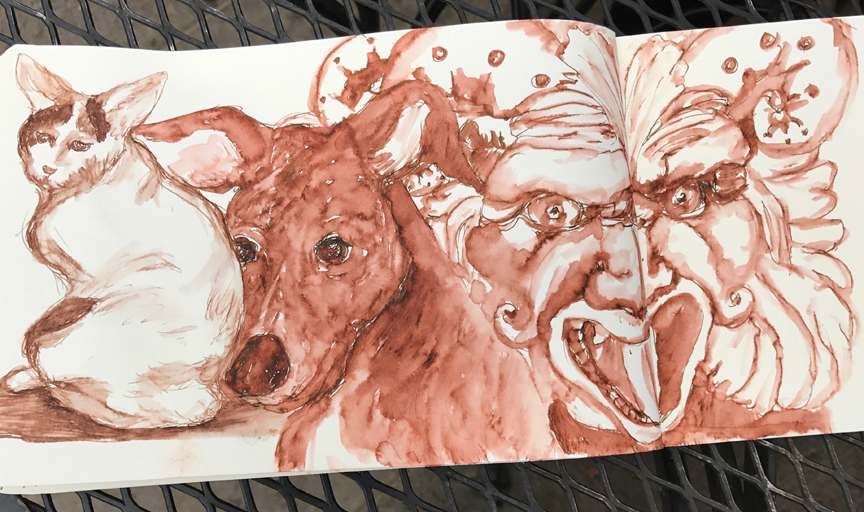 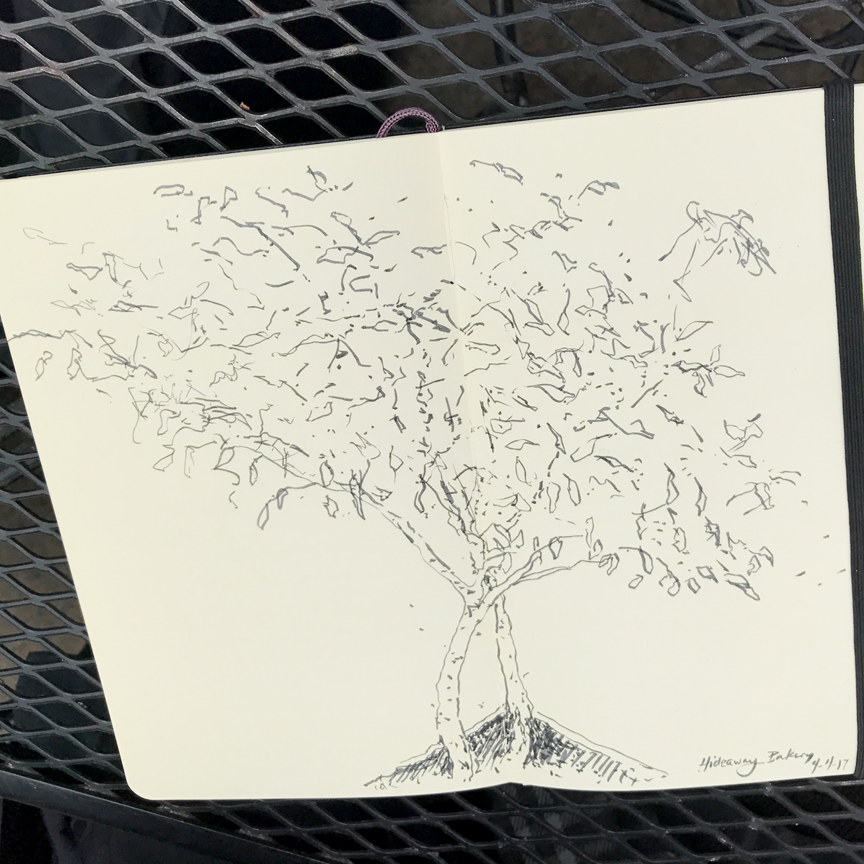 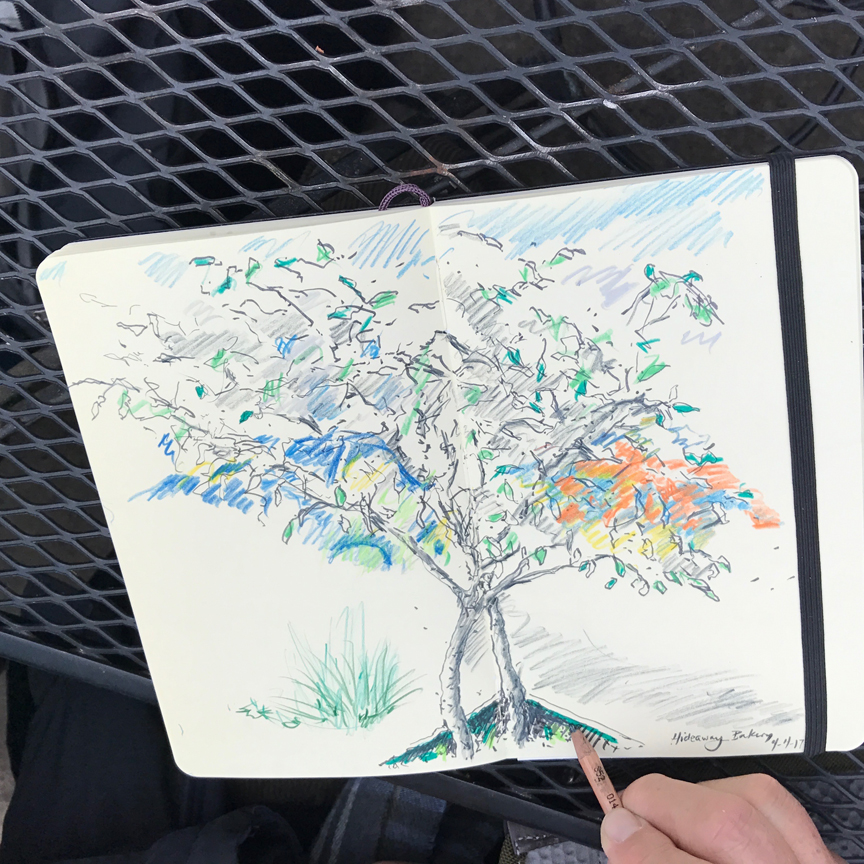 Ken sketched a  tree across the way, starting out with his left hand to keep the lines loose, then building up the sketch with color. 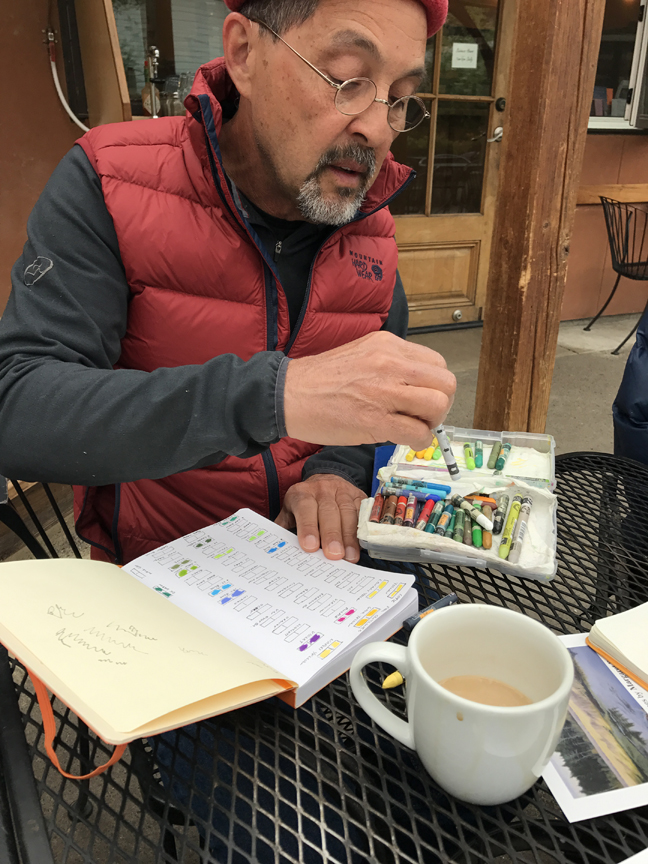 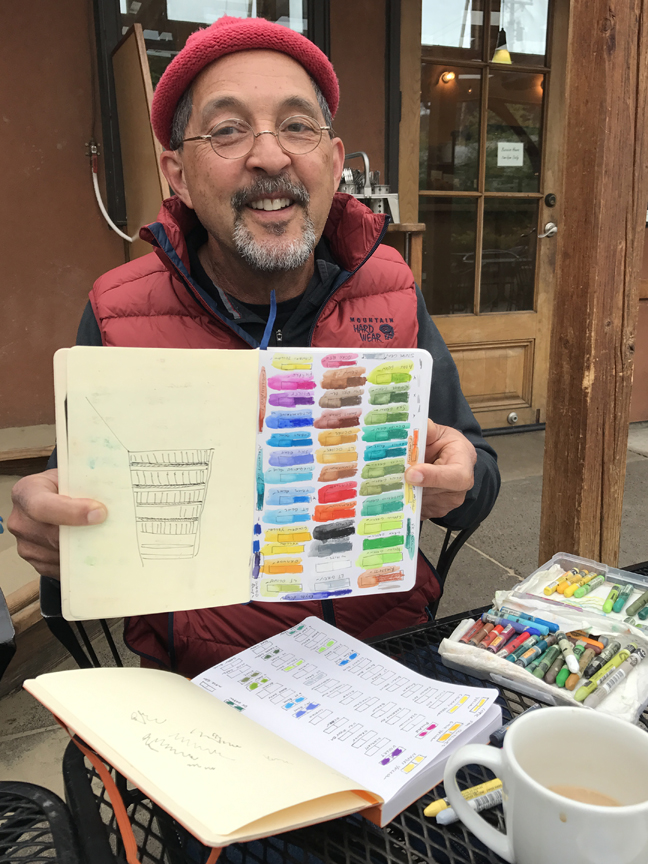 What are you up to, Hugh? Oh, color charts! See, one with and one without adding water so he can easily choose the effect he wants. 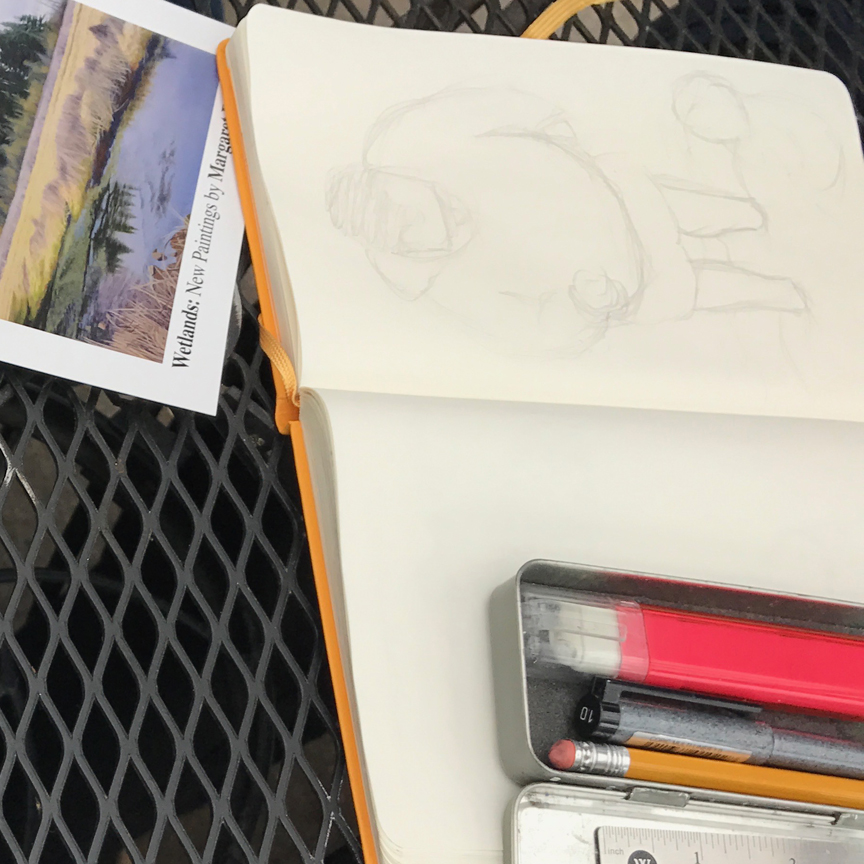 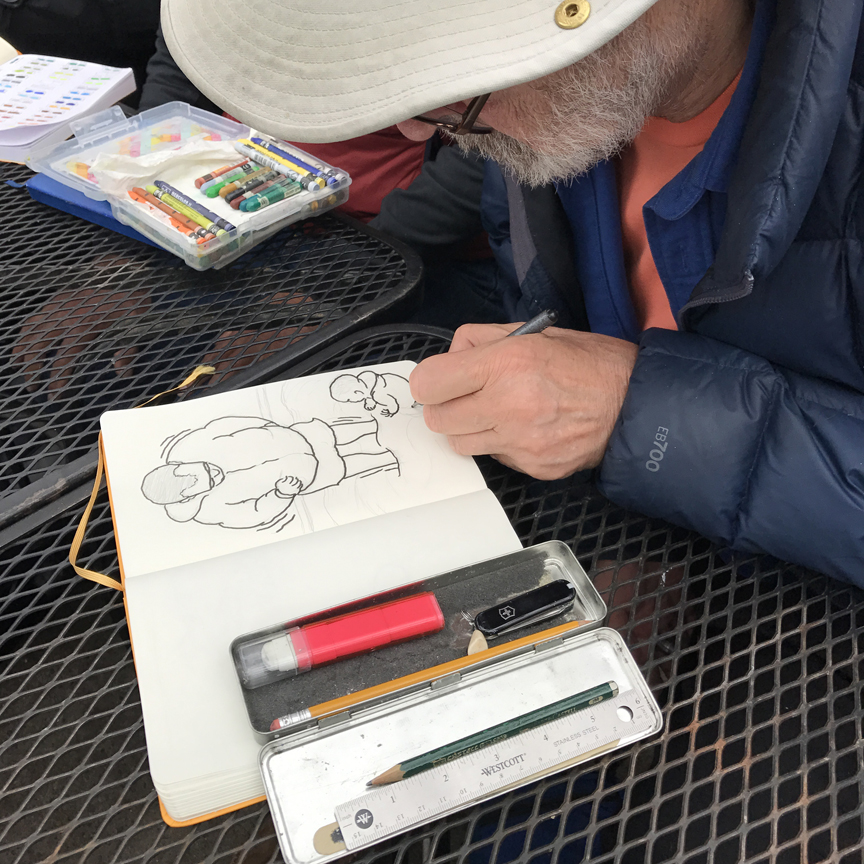 Erik drew what he saw in front of him – a dad playing with his son in the nearby sandbox. He really captured a charming scene.

Bev looked up and sketched the ceiling fan, string of lights, and then added the edge of the doorway and bamboo plant. Fun angles – wow. 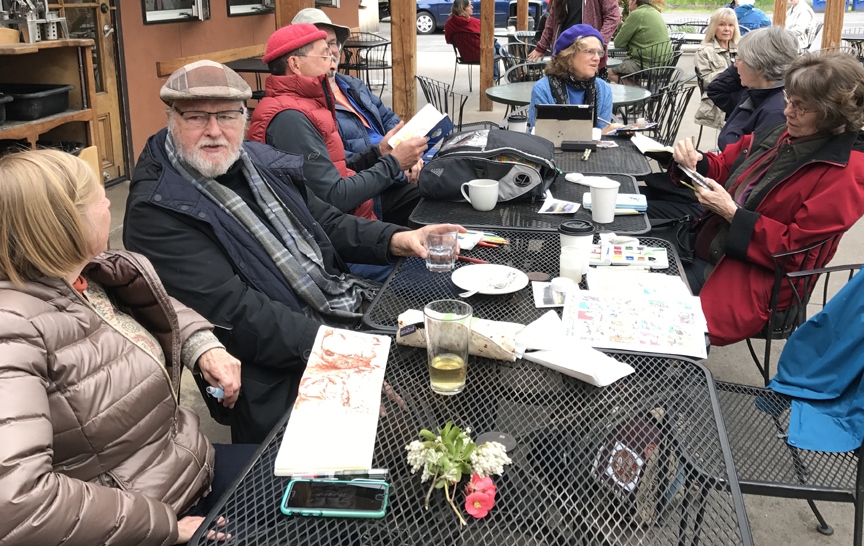 Then we had to add another table & some chairs at the end, because Penelope and Helga came to sketch with us, too. 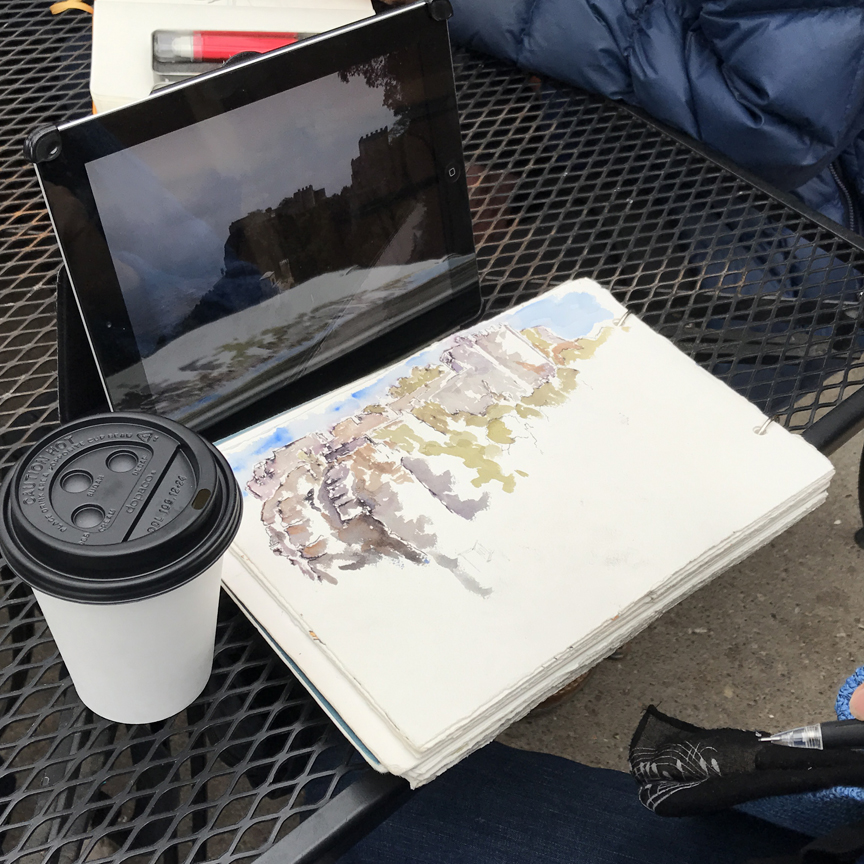 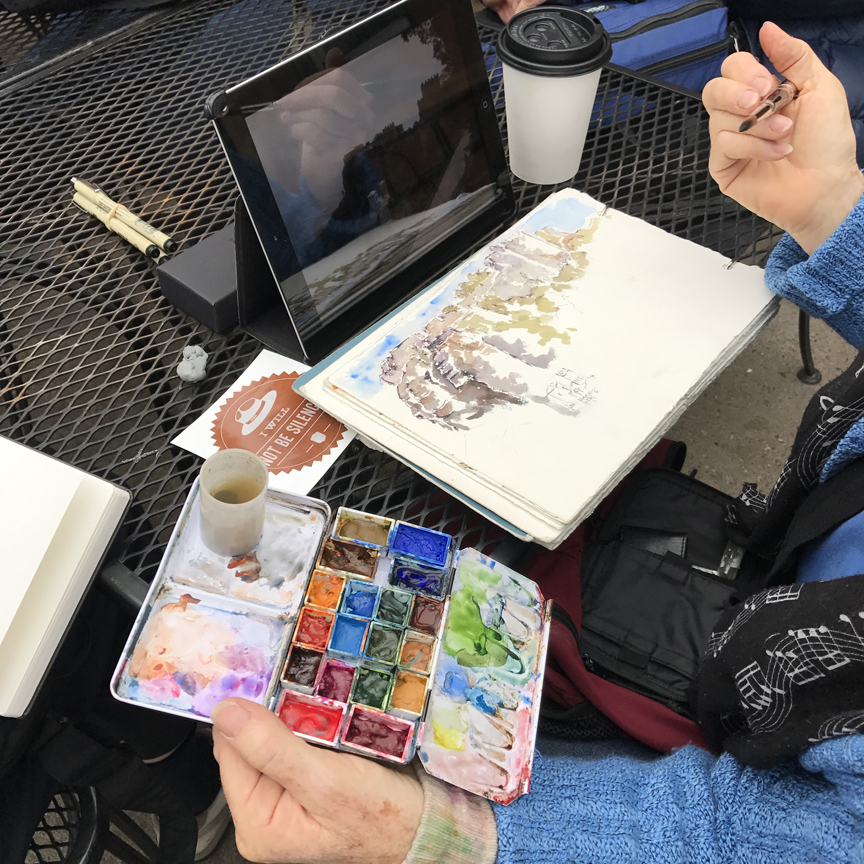 Penelope had a travel scene on her iPad that she was working on, adding careful layers of watercolor to bring it to life. 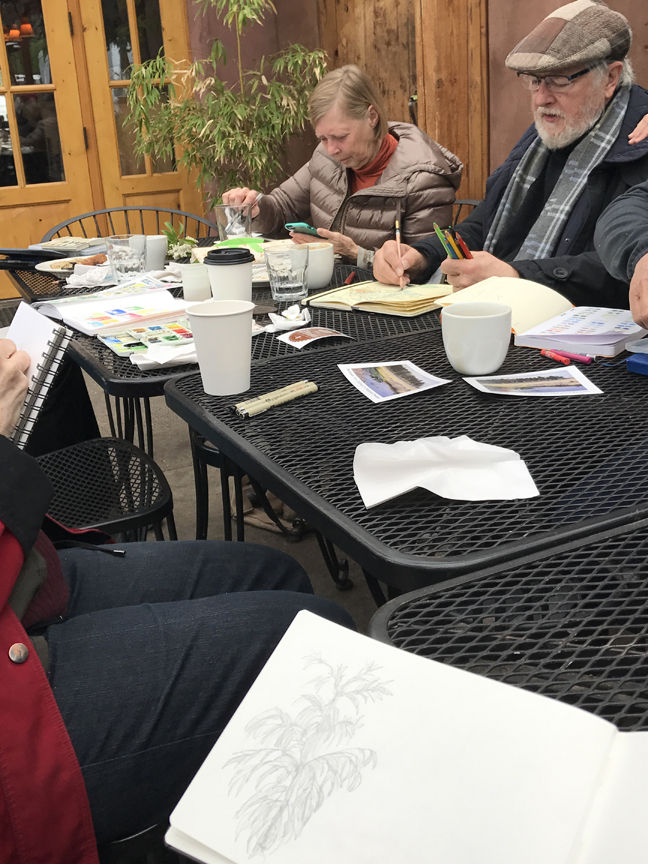 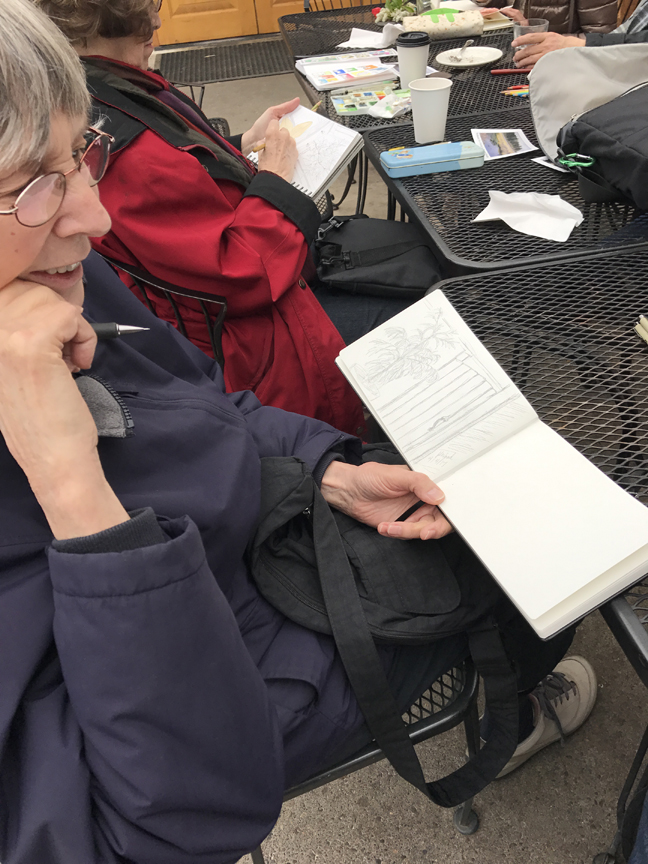 Helga spotted the bamboo plant just beyond Barb Sh & Ken, then included the wooden gate next to it. There’s a lot to see in this spot. 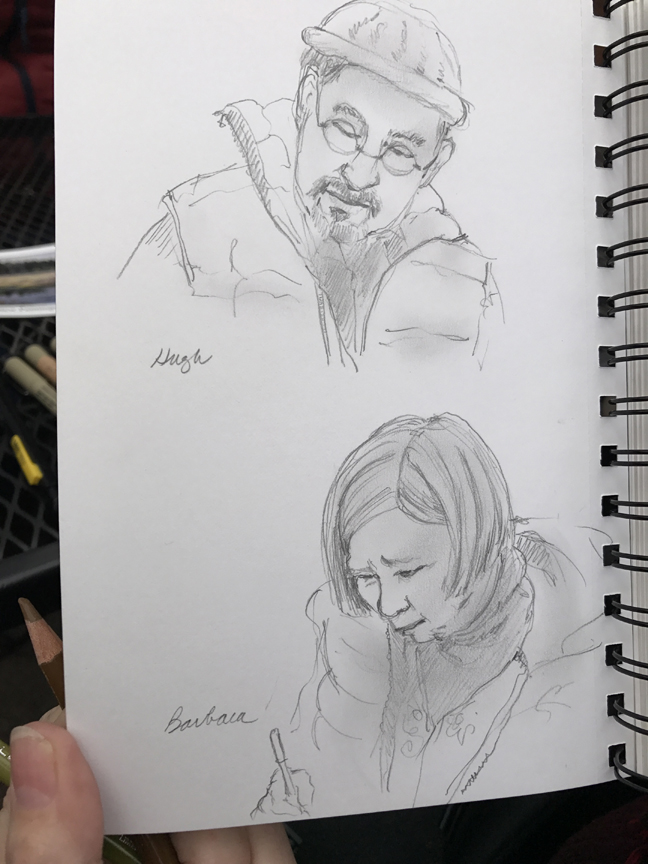 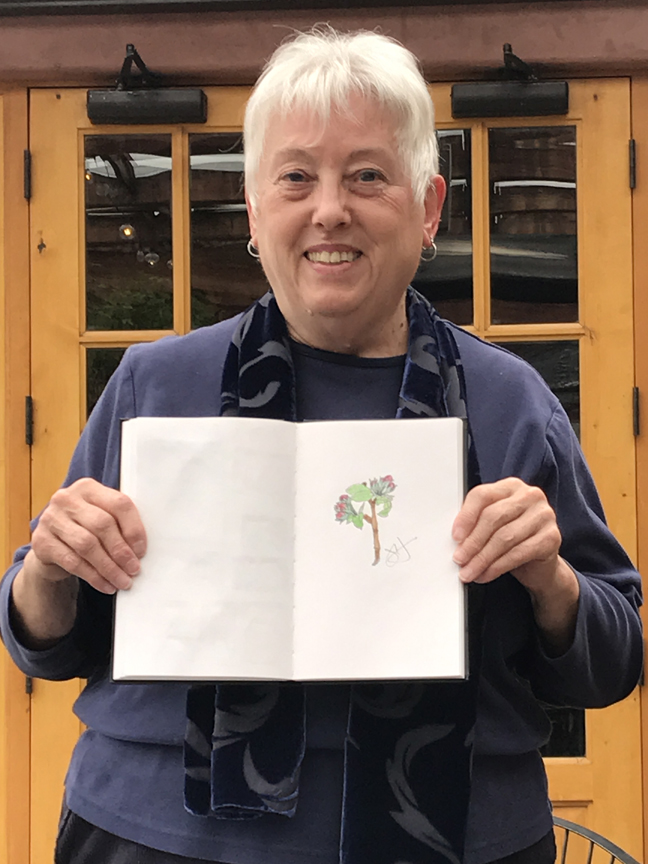 Bev said to show this sketch of Hugh & Barb Sh instead of her fan sketch, so I’m adding it. And Penelope asked if anyone had taking a photo of Jane to include, so here is one with apple blossom sketch.