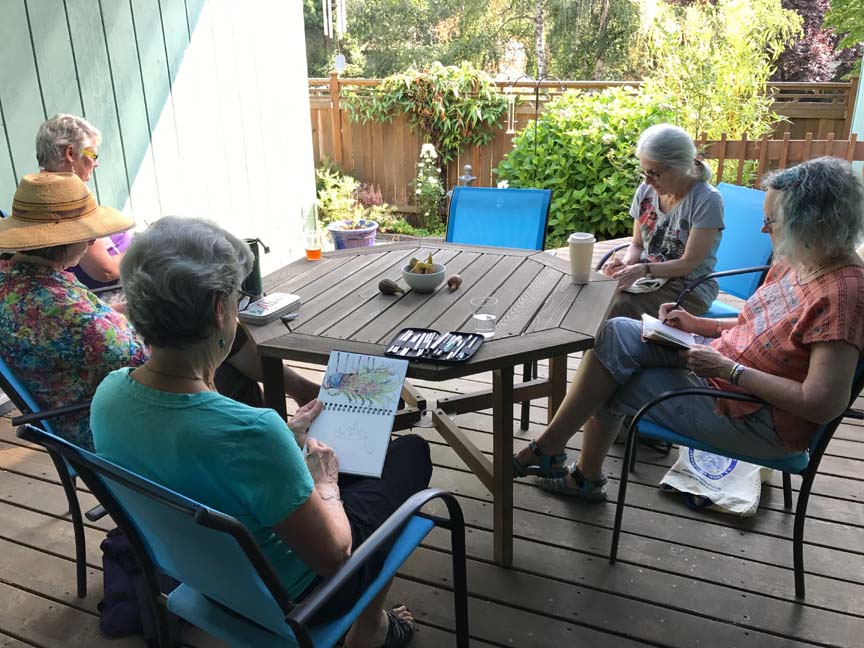 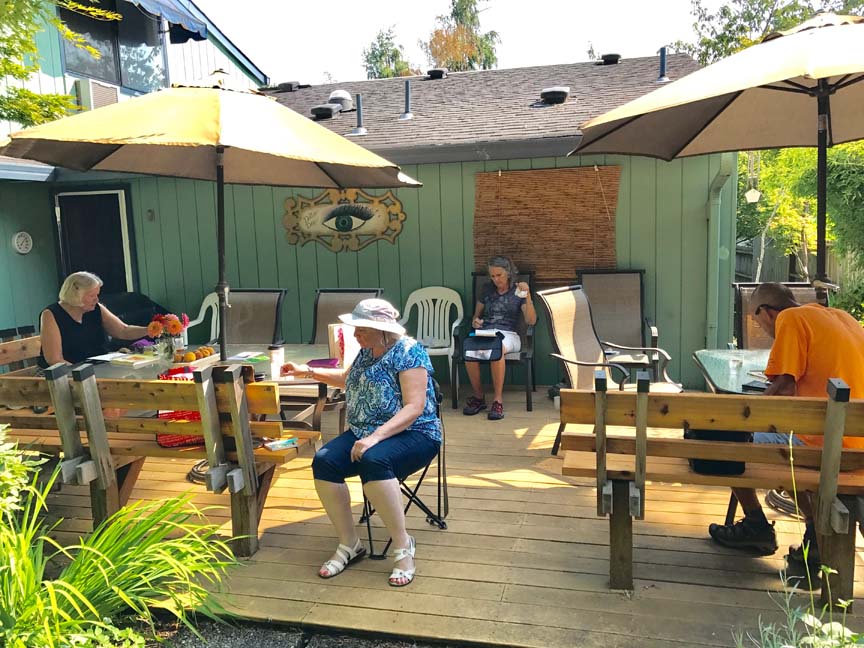 We had quite a gathering on the decks at Jane’s house – Vikki Wetle, Marsha, Penny, Vikki’s friend Katie, & Barb So on the east deck; Lona, Danita, Sandy, Hugh (& Jane) on the west deck. What a day! 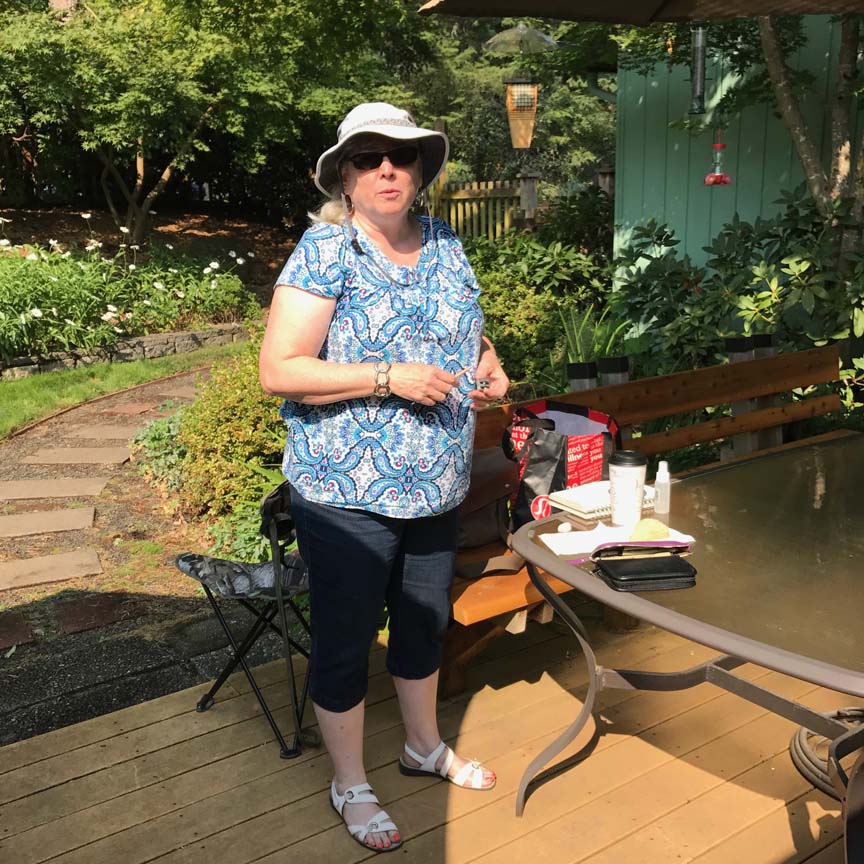 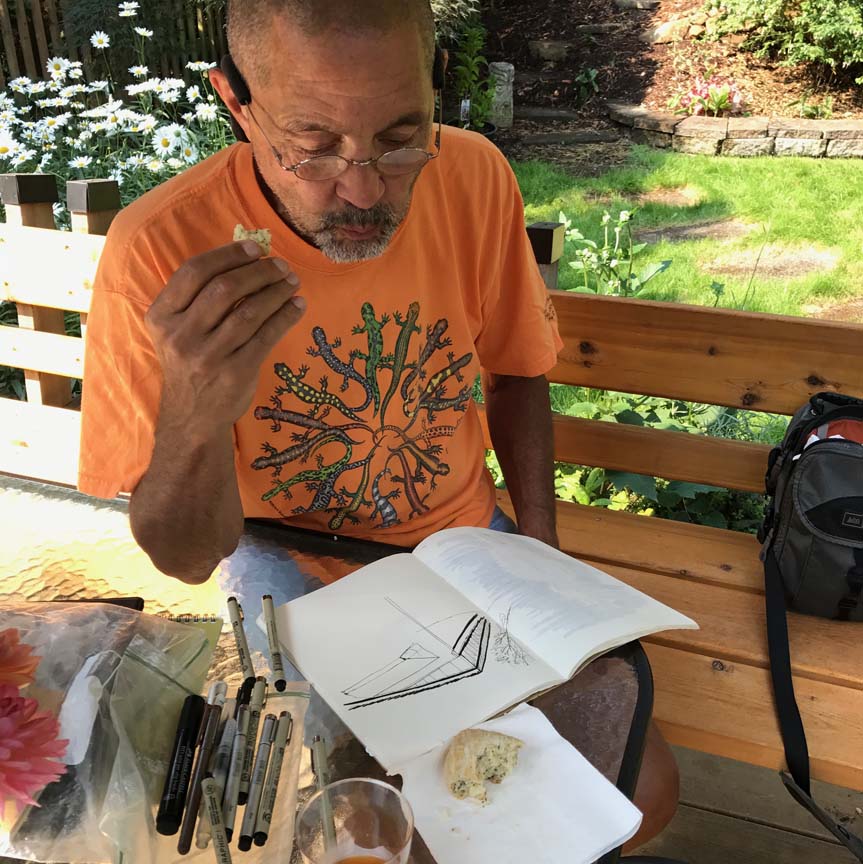 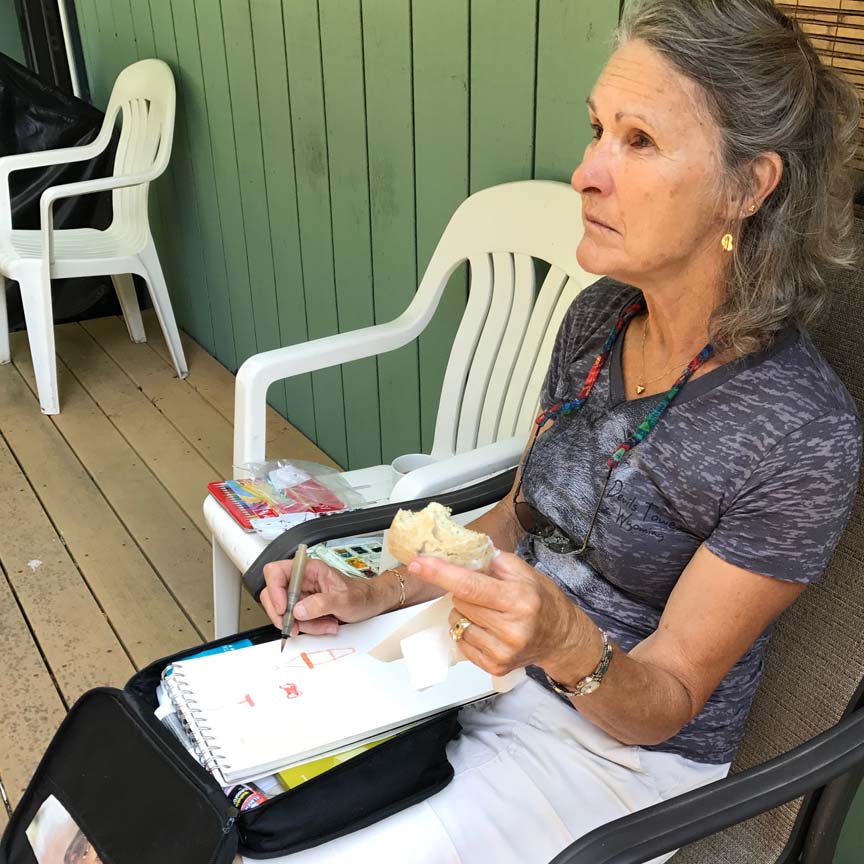 Danita brought scones, much to the pleasure seen here with Hugh & Sandy. The scones quickly made their way to the other deck, too. 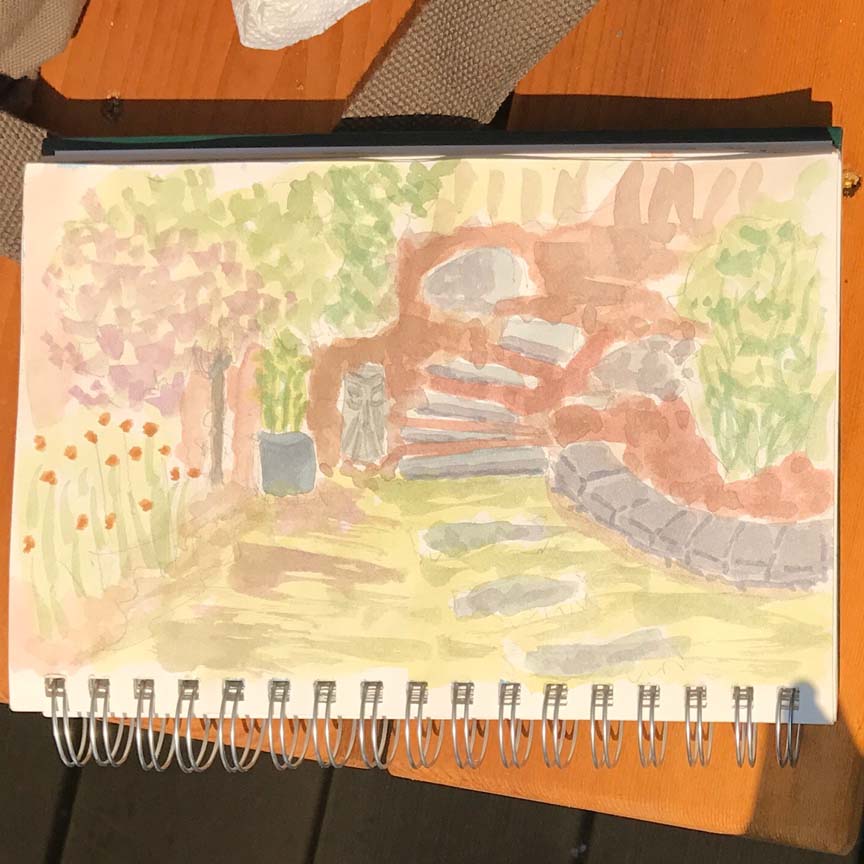 Danita took on the landscape, first with a watercolor layer, then later with defining ink lines. What a difference some ink makes! 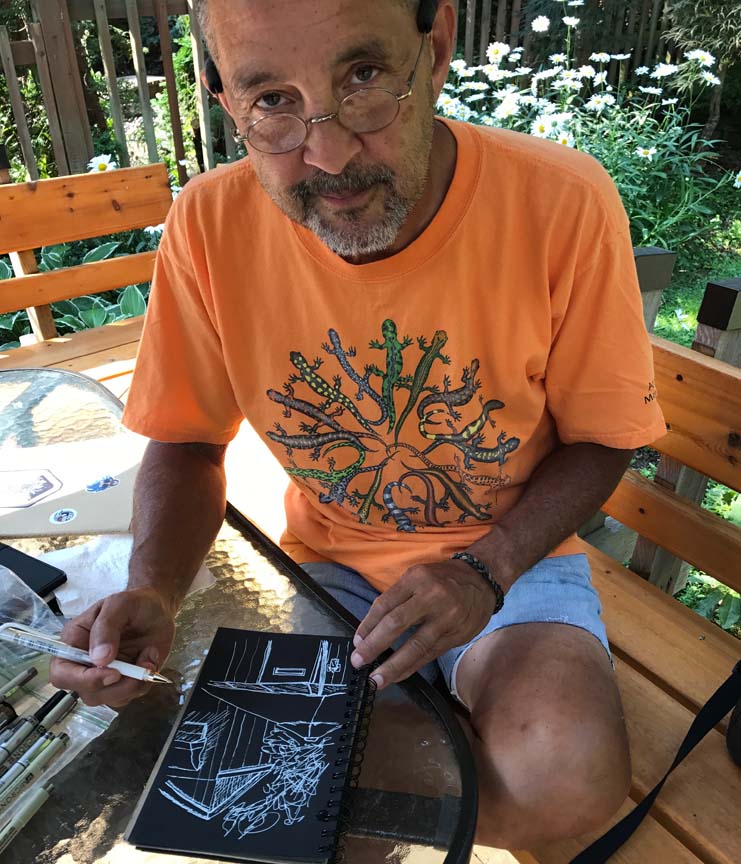 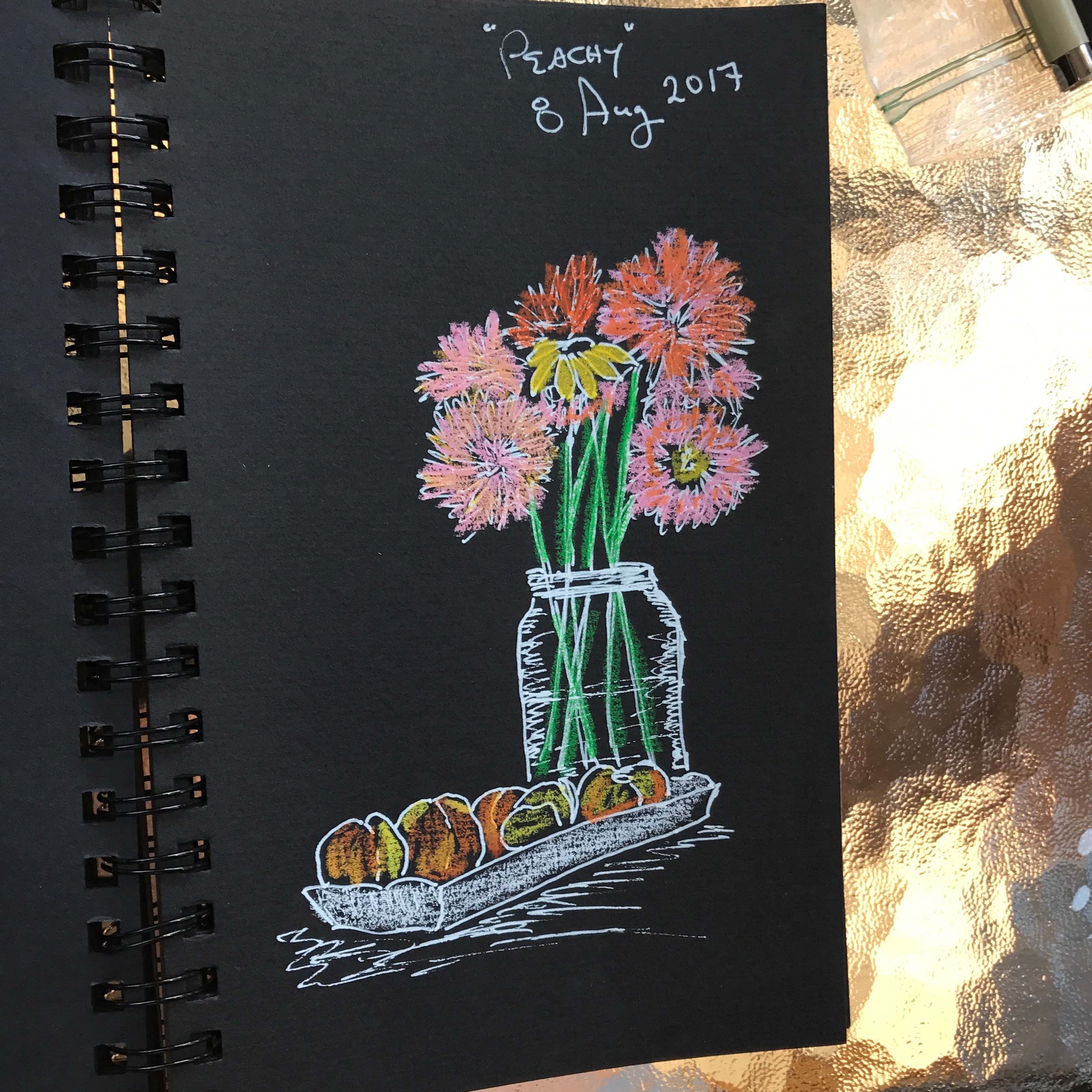 Hugh moved from his initial architecture lines of black on white to a white on black version, and then on the the flowers (from Marsha, and the peaches (from Vikki).

Sandy (aka, the bird lady) just couldn’t wait to put paintbrush to her sketchbook to capture the blue heron that was in the newspaper. 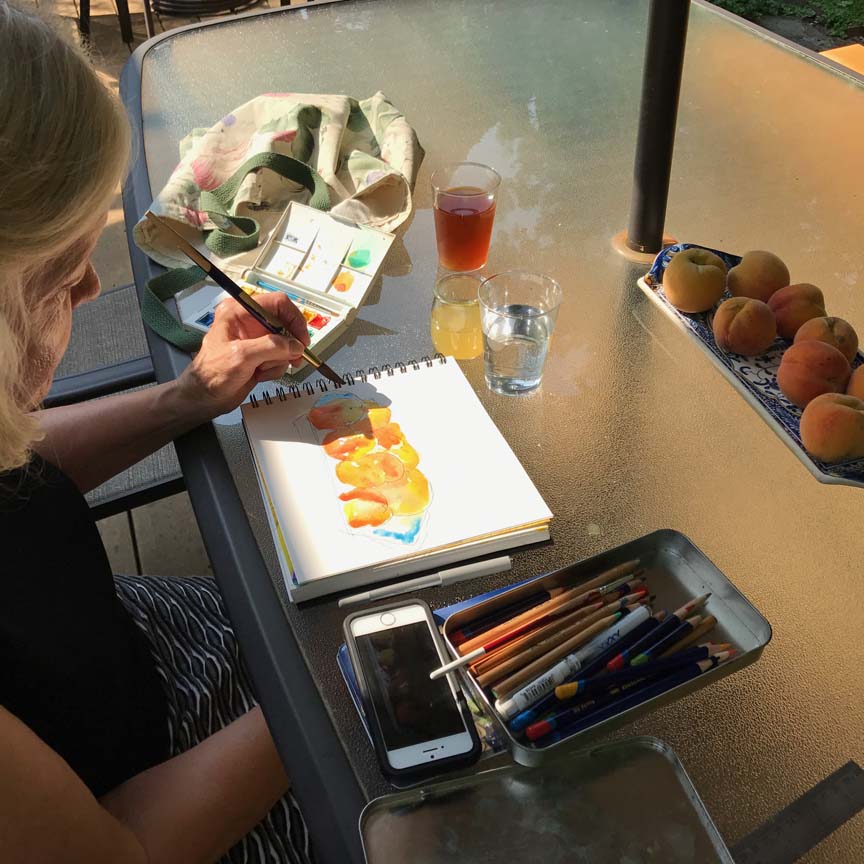 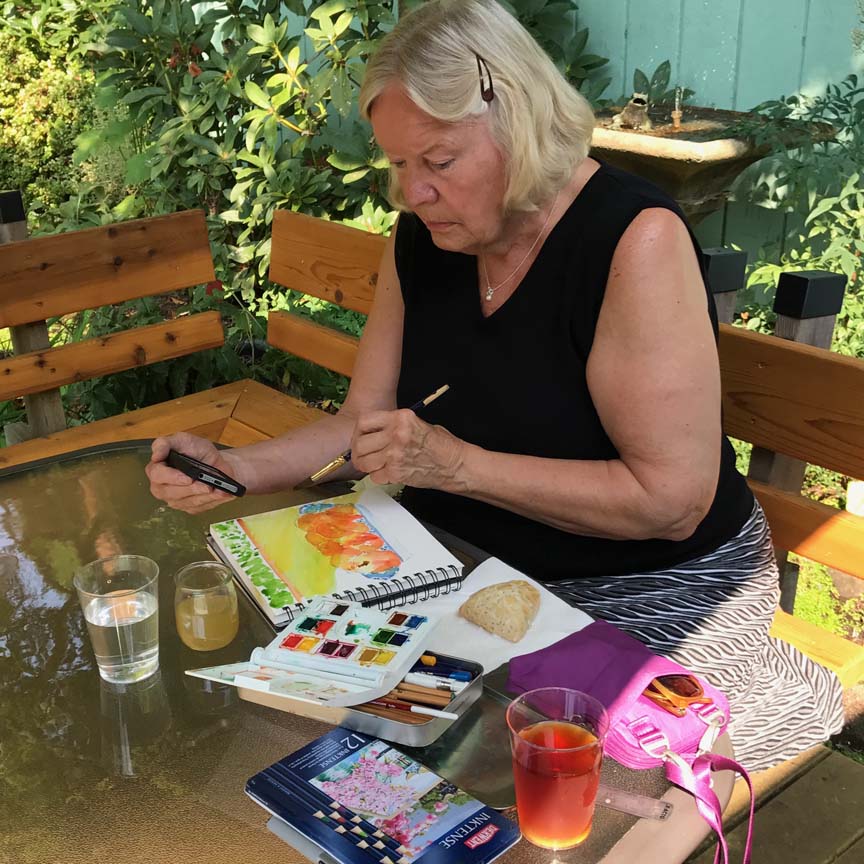 Lona was attracted to the tray of peaches from Vikki’s orchard.

Vikki drove down from her ranch in Amity, bringing freshly picked peaches and figs (& her friend Katie, too, who sketched the figs).

Helga sketched the whole table in front of her along with boxes of scones & a bowl of figs. She likes using pencil because…corrections! 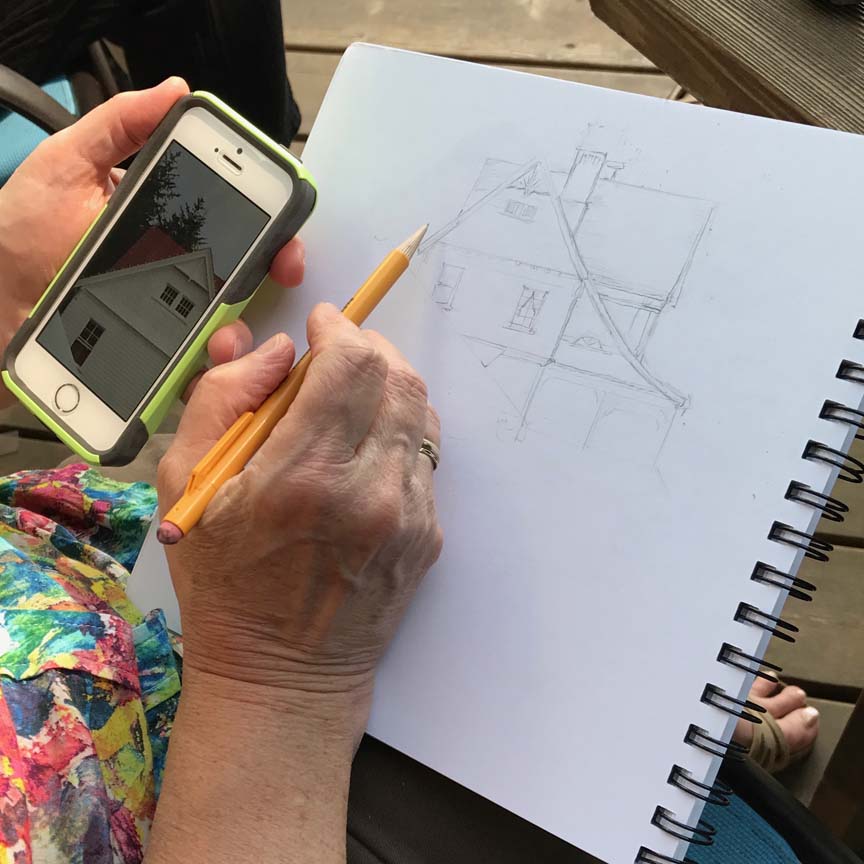 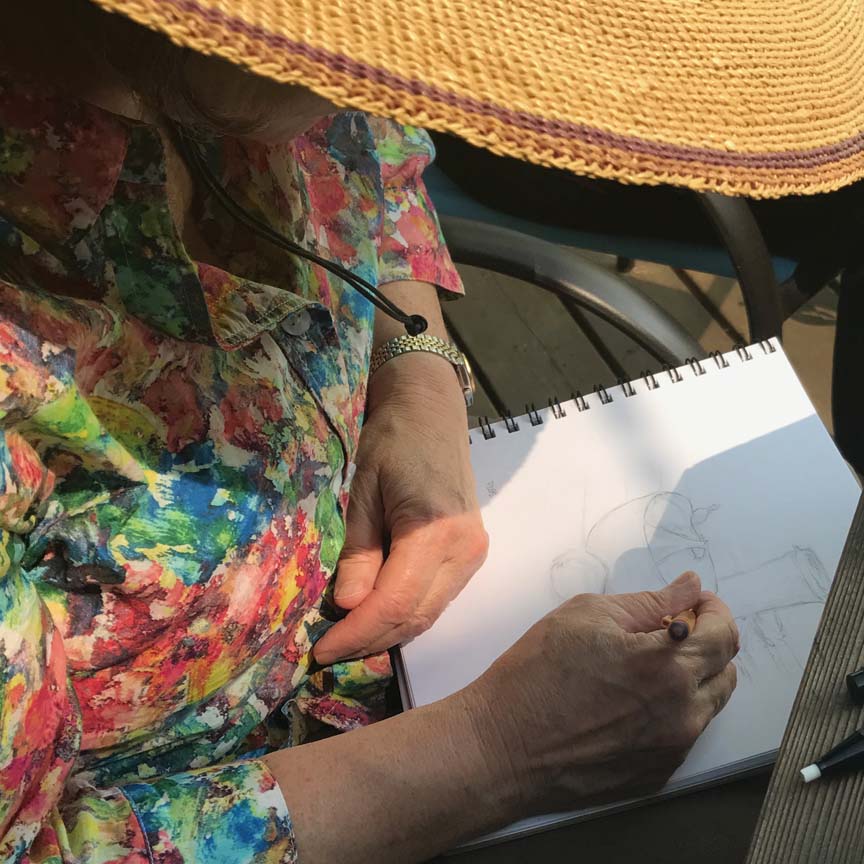 Marsha had a sketch in mind from a photo, but finally gave in to sketch the bowl of figs. (They were disappearing pretty fast). 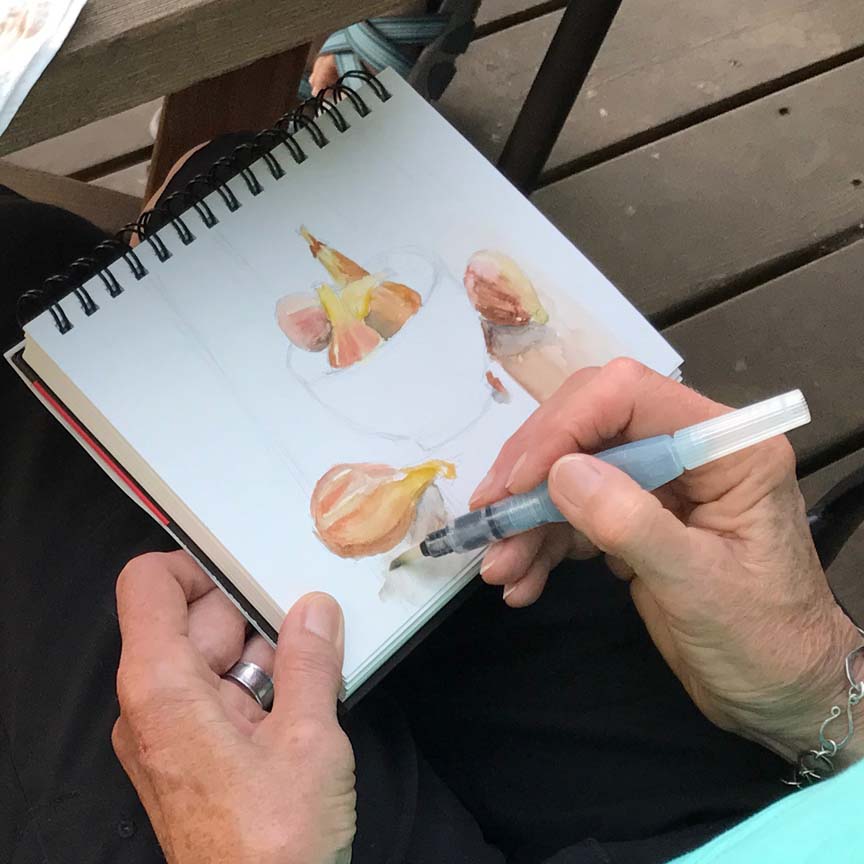 Penny found the figs irresistible, too – look how her sketch develops. 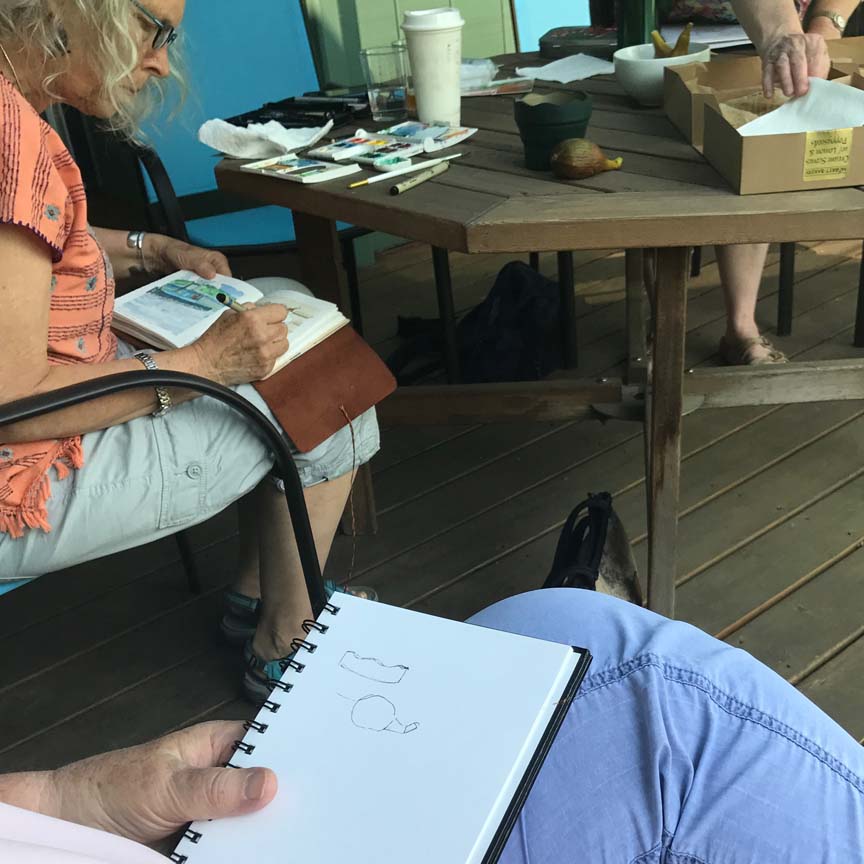 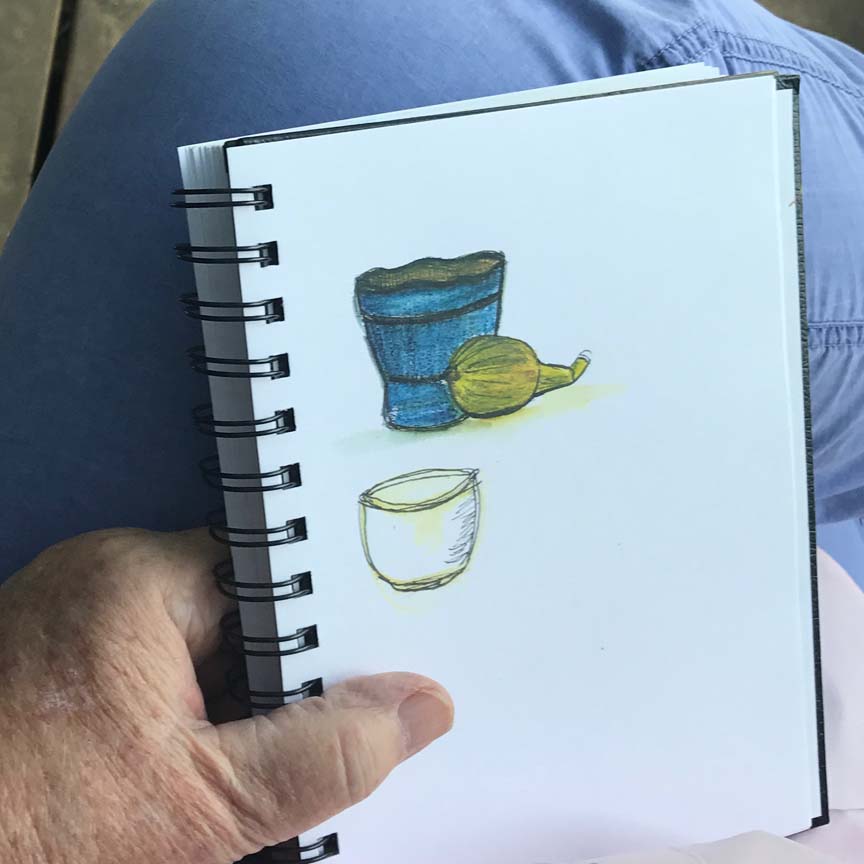 Here’s Katie sketching the figs, while Judith selects one to sketch along with Katie’s collapsible water container.

Barb S-N sketched the figs, too, as well as a blue glass cup – lovely! 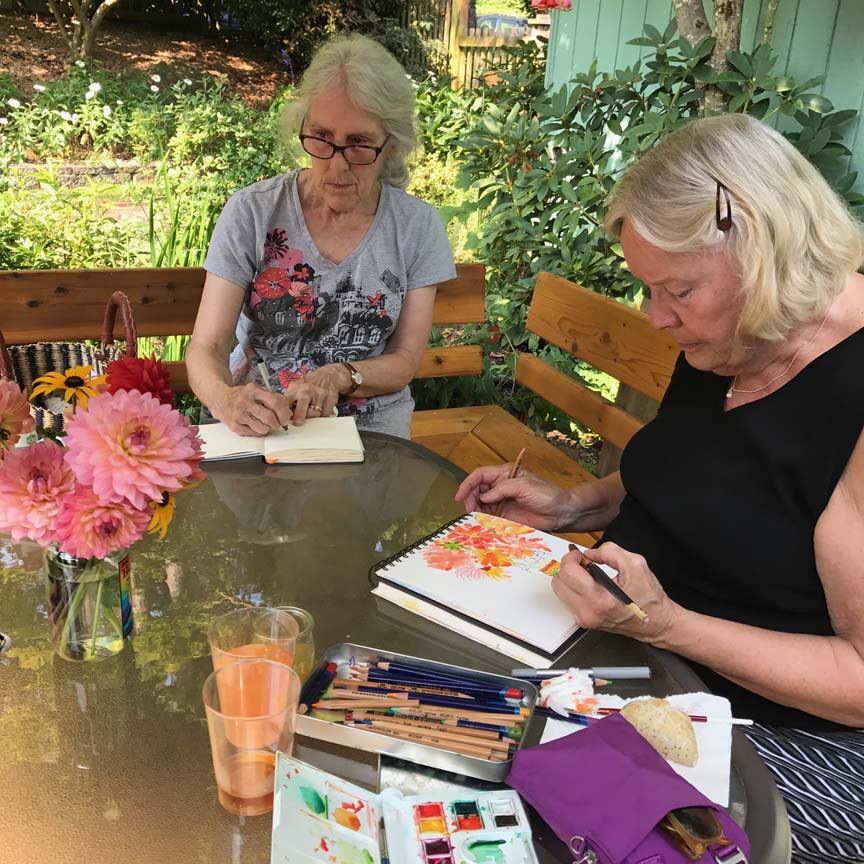 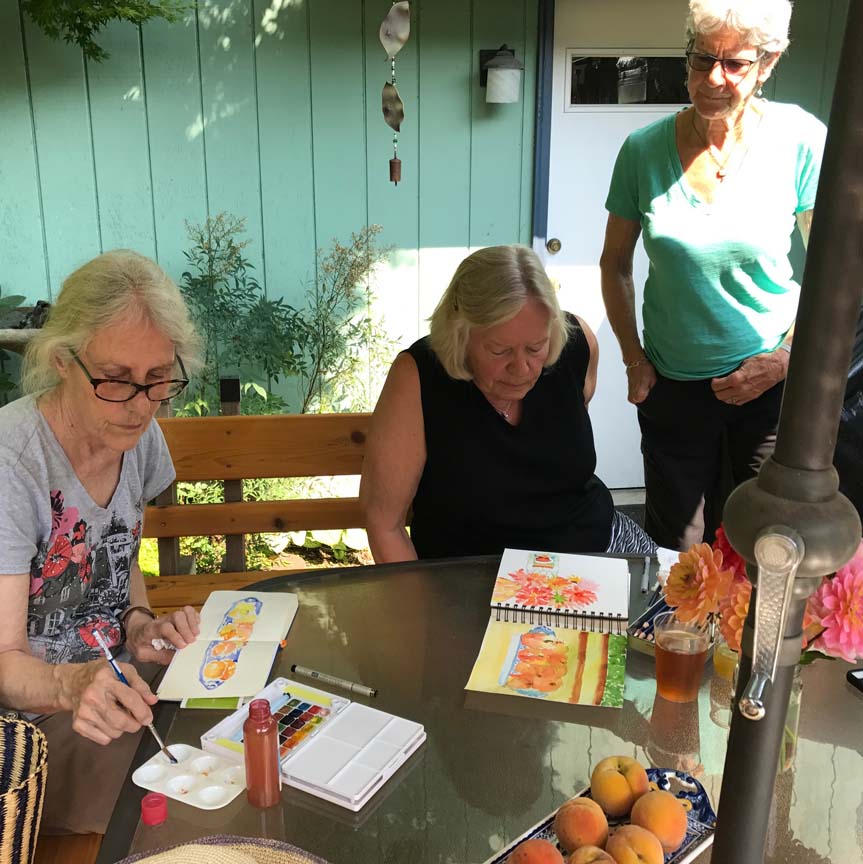 I think Barb So smelled the peaches, because she migrated to the other deck (along with Penny) to sketch with Lona. 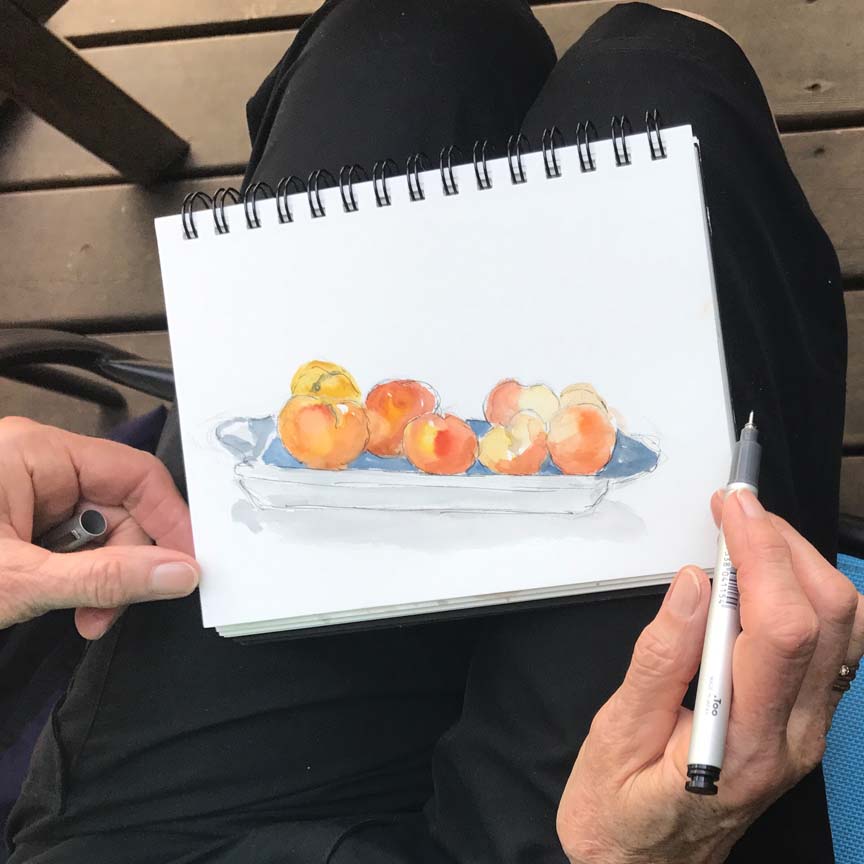 Penny immediately sketched the peaches. Jane did, too, after everyone left (& after she ate one of the peaches). Nice time!